Return to PeterT's bliki
I've been given permission to share an analysis of the Computing PoS by BCS, which shows which bits are NOT computer science. Well you know I am sad, so I couldn't resist, and it's very interesting ...

The two analyses, which are presented below, seem to highlight a number of issues:

Thus this analysis paints a rather different picture to some of the earlier analysis (by me and others) and counteracts the general impression that many people seem to have that the new PoS is all about programming. This is great news for those of us who think that whilst computer science is important, digital literacy is much more so.

Analyses of the Computing PoS by strand

In the left hand column in the tables below I have provided an analysis of the Computing PoS that I was given by Richard French from the BCS, which he said Bill Mitchell had produced to show which bits of the PoS were NOT computer science. I think the draft that was being used is probably the one that was put out for consultation.

In the right hand column is my analysis of the latest version of the Computing PoS (8-July-2013) which tries to identify the three strands which supposedly make up Computing (i.e. computer science, IT, and digital literacy). 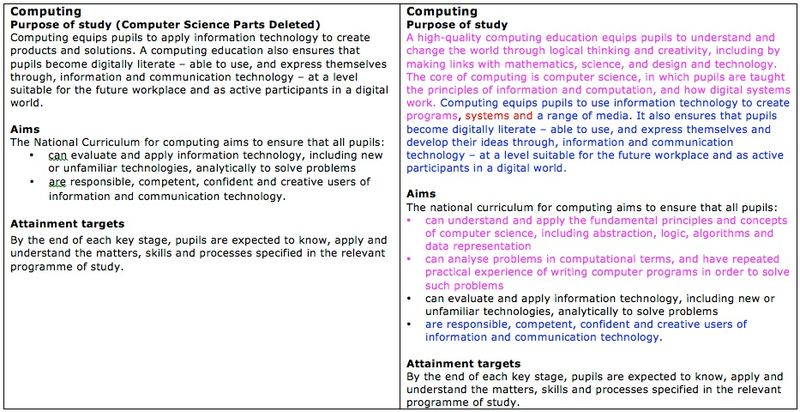 You could easily argue that the fourth bullet fits into digital literacy, though I think you could also put it under IT.

I wasn't sure about the fourth bullet, but tend towards thinking of it as being part of IT rather than digital literacy. 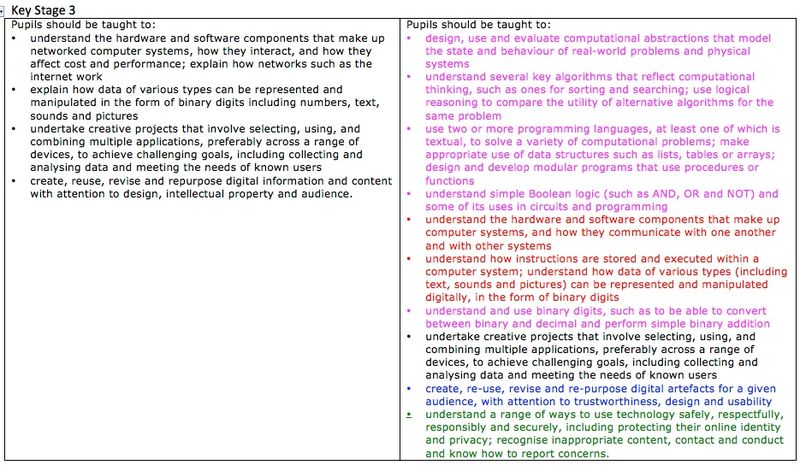 I think that the text in black in the right hand column could be part of digital literacy, but it could also be part of IT.