In reading this research it is important to remember that the data analysis is based on the data that we collected, which inevitably is partial and reflects practice at the time.

Rory's use of ICT outside school

Rory, who was 11, has access to a wide range of digital technology, including: an XBox 360 (which used to be his dad’s); a Wii Mini; an old iPhone which he has because he sometimes walks home from school alone; a small android tablet which he rarely uses during term time; a school iPad which he has to hand back over the summer holidays; and a Windows 10 laptop in his mum’s office, though she commented that “it’s not mine, it’s our laptop”. There is unfiltered WiFi throughout the house providing access to BT Broadband, for which Rory has the password. He has a range of peripherals, including a Bluetooth keyboard for the iPad and high quality recording equipment set up as “his complete studio” (Interview with Rory’s mum) in his mum’s office. He also has use of his mum’s mobile phone and personal iPad (which he uses in preference to his school one because it has no restrictions), as well as a smart television (TV) and another TV with a Sky box. 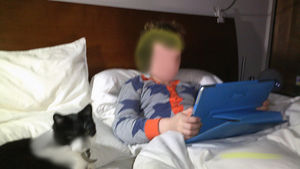 When asked what his main uses of ICT are at home Rory said that he mainly played games, which he did not see as being educational (“not that many educational games”). He named a range of games, including: Minecraft and Halo on the Xbox; Minecraft, SIMS4, and Robots on his laptop; and Steam (which allows you to play lots of games). He said that game playing with his friends was probably his favourite ICT activity. However, this emphasis on games masked the richness of his ICT practices.

On weekend mornings, he played multiplayer games over the Internet, such as Minecraft, which involved using services such as Mojang to download mods (modifications) for Minecraft (including, for example a Pokémon extension). As he played he communicated with his friends via Skype (as well as in-game chat). When building things, Rory tended to work collaboratively with two other friends.

Apart from using ICT for ‘entertainment’, Rory used ICT at a sophisticated level to extend an interest in the physical world stimulated by his attendance at drama school: film-making and drama. He used his public YouTube Channel to upload videos of what he did in Minecraft as well as his own films related to his interest in drama.

Rory said he was pretty confident using ICT: definitely when it comes to using his Wii and Xbox, and he could sort out most of the technical problems he had at home without help.

ICT clearly played a major part in Rory’s life, occupying most of his time at home (though during the week he often didn't get home until well after 6pm). Rory seemed clear that he would be at a loss without access to ICT at home and if his parent stopped him using it “I’d feel so bored, and I wouldn’t like them that much anymore”. His mum thought that he would be bored initially, “and then he would pick himself up and do something else. He would find something else that he was passionate about.”

Taking into account all of Rory’s ICT activities his participation level on the Digital Practice Framework was judged to be Core and, depute his evident interest in Minecraft, his sophisticated use of ICT related to his interest in drama located him in the ‘Extend an interest’ category.

See Section 5.1 of the Meta-analysis report for a fuller account of Rory's ICT practices both outside and in school.

Grace's use of ICT outside school

Grace, who was 11, used ICT for a range of purposes from playing games to watching YouTube videos to texting friends. She primarily interacted with her friends using iMessage and FaceTime on her phone.

Grace said she would feel ‘lost’ without ICT saying "I would feel like I wouldn’t be able to interact with my friends as much, because we do texting and messages as I said". Grace did not have unlimited access to ICT as her mother ‘sets a timer’ on all her digital devices. However, Grace shared the fact she would sometimes ‘sneak’ into her bedroom to text her friends.

Grace’s mother said that Grace used ICT to "learn things that she wants to do, hobbies. Things like making different hair plaits, playing the different games".

Grace’s main purpose of ICT use was to make and maintain relationships and she also used ICT to find out about her physical world interests. She, like Rory, was placed in the 'Extend an interest' category on the Digital Practice Framework. Although she would break the rules in order to engage with ICT more than her parents allowed, her degree of participation was judged to be lower than Rory’s, so she was categorised as Engaged rather than Core.