The school has a Star server running Server 2008. Internet is provided by Virgin (50mb fibre). Network activity is filtered using Websense and monitoring is via Securus. There is a IGB LAN with 52 mbps wireless connectivity but no connectivity available outside school. The school has 32 iMacs, 46 Windows 7 desktop PCs, 48 XP desktop PCs, 64 laptops /netbooks and 18 student mobile phones. There are 5 iPad 1’s, 12 iPad 2’s (16GB), and 22 iPod touches (8GB), a case for synching and charging, a MacBook air and an Apple TV. Onsite support is provided by two IT full time officers and remote support is provided by the LA. The core ICT Team attended training from the local Apple education reseller and was then cascaded to other staff. Training programs are in place to assist staff in making effective use of the technology and the school is planning CPD for the staff on the iPads and their impact on teaching and learning.

Specific project equipment: 12 x iPad 2’s (16GB). The school has purchased a case and a MacBook Air for synching and charging and an Apple TV for whole class demonstration but this has been difficult to set up and is not yet operational. During the project the pupils used the iPad camera, the photo gallery, the sound recorder and an app called SonicPics. SonicPics provides a simple but intuitive interface for the creation of presentations.

As many of their pupils have complex learning difficulties, this school aims to be at the cutting edge of using technology to support teaching and learning. When the iPod Touch appeared the ICT SL began to research its use as a 1:1 computing device for the pupils because of their large screen size when compared to mobile phones. This has now been further developed into another project stream, 1:1 iPads to engage ASD pupils with their communication skills, which is the specific focus for this case study. The project involved a class of Year 7/9 autistic pupils for two sessions a week since September 2012. Four of the (seven) pupils in 3R where previously in the autism unit but were brought out into the mainstream classrooms in the school. This was a success so it was decided to form a class around them. Although these were ICT lessons the pupils were taught in their form room and there were both ICT and English objectives for all sessions. 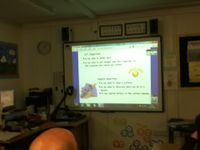 The aim of the sessions was to enable the pupils to create a presentation about their school life which would be shared with other pupils in their class and with another school. This involved:•taking photographs at various points during their school day•sorting their photos into an album on the iPad•sequencing their images into a presentation template in SonicPics•recording their narrative onto their presentations•reviewing their partner’s presentations•refining their presentationsEach of the sessions followed a similar format:•A whole class introduction by the ICT teacher•Independent / work in pairs with support from teaching assistants •Whole class plenary •Choose time (10 minutes). This is a typical feature of all lessons and is designed to provide the pupils with ‘time out’ between learning activities.In terms of what was being addressed: ‘Typically the pupils do not like you getting involved in what they are doing; the iPads allow you to support them without the need to get in their personal space’. Their ease of use, portability and large screen means that the pupils are able to be more independent in their work but also facilitates the support from teaching assistants ‘It would have been much more difficult on a laptop ……… with an iPad you can spread your eyes around and see what they are all doing whereas the laptops split them up more'.

For the staff the main impact of the project is the realisation that the pupils are much more able than they assumed. ‘It’s opened the eyes of the staff to what the children are capable of’. The iPads user interface enables the pupils to be more independent in their work’ and ‘It’s interesting to see how much they leave me alone when they are on the iPads’. The pupils also find the iPads very motivating and are much more willing to do their work generating a positive impact on behaviour ‘The iPads stopped the conflict’. This has reduced staff stress levels considerably and staff who are not ICT proficient are happy to support the pupils using the devices. The school has implemented a new system for the management of the devices because moving the devices around is difficult due to the physical layout of the school. Ensuring that the iPads are in the correct area is delegated but mistakes cause disruption to lessons and can result in issues with pupil’s behaviour. Synching and charging took a long time and so the school purchased a case and a MacBook air to facilitate this.Whole class teaching of new apps was difficult so the school bought an Apple TV but this is not working yet. As an interim step, the teacher began to show the more able pupils how to use the apps and used them as digital leaders to help the others. This is usually difficult with autistic pupils but because the pupils are motivated by the iPads and they are able to master the apps relatively easily, this has worked really well. ‘Digital Leaders have been enabled by the iPads’.Having 1:1 iPads has had a positive impact for the pupils involved in the project. The pupils are more engaged in their learning ‘They all enjoy doing it and we don’t seem to get ‘I don’t want to do it’ which we do in other lessons’ so their performance has improved. They are proud of what they have achieved and they are able to work more independently’. They are able to achieve their learning outcomes ‘Much more willing to write on the iPad because they like how it looks and they can approach it at their own speed’ and ‘They achieved both English and ICT objectives.’

The management of devices has been difficult during the rollout of the initiative. Advice was available from the local Apple education reseller in terms of the initial setup of devices but much of the strategy for managing of devices has been learnt by experience. Initially, there was little advice available to schools that were looking at handheld devices to support teaching and learning. One piece of advice is that schools who are considering this kind of initiative should partner up with a school that has already developed some experience in this area. As the school is now implementing 1:1 computing for all pupils, they are now developing a new system to manage the devices and are planning what resources this will require.This initiative has resulted in a change in pedagogy that probably could not been possible without the iPads (the school has already tried a similar with netbooks and laptops but these were too difficult to be use and were often damaged). ‘It’s not yet typical but it is at the forefront of the new way of working with those children. I am going to ask the Head to observe a couple of lesson so she has seen it and then I want that to be a model for other departments of how to work (in other subjects)’. We haven’t got enough iPads but before we commit to more of them we want to look at Windows 8 tablets. It’s part of our research and development. It’s the next step’.